What is a riad?

The word “riad” comes from the Arabic for “garden.” Used to describe traditional North African and Andalusian homes, it refers to a style of house built around a private rectangular courtyard, maximizing privacy while allowing plenty of light into the home. 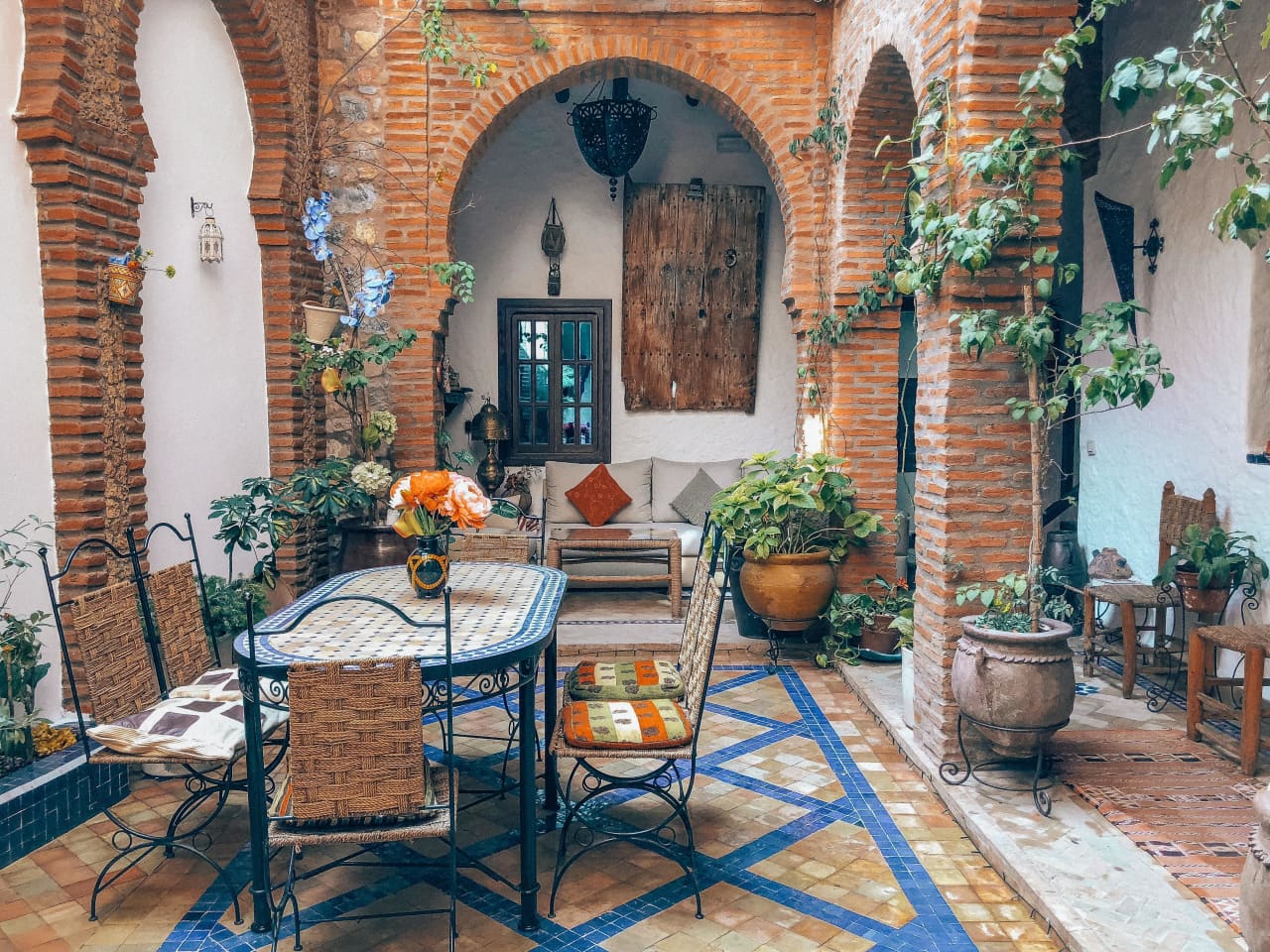 Riads are houses built around a private rectangular courtyard, maximizing privacy and allowing light into the home. Photo: Lindsey LaMont

Houses built around interior gardens date back to ancient Middle Eastern and Greco-Roman cultures and were later built by the Persians and the Mughals. The Almoravids, an Islamic dynasty based in Morocco, conquered modern-day Spain and Portugal in the 11th century and commissioned Muslim, Christian and Jewish architects across the Iberian Peninsula—then known as Al-Andalus—to create spacious palaces that contained hidden courtyard gardens. The legacy of these ornate Moorish royal palaces is found in the riads of modern-day North Africa, particularly in the historic Old Medina areas of Morocco’s major cities.

Well-suited to the temperate North African climate, riads allow for a seamless transition between private interior and exterior spaces. Each long, narrow room opens directly out onto the rectangular central courtyard. The concept, rooted in the Islamic faith, is to transform the home into a miniature paradise on earth, reflective of the divine. The interior courtyard prioritizes privacy and encourages inward reflection, its beauty belying the humble simplicity of the riad’s exterior, usually a blank wall with a simple wooden door and few—if any— windows. Many of the traditional motifs and designs in riads contain ancient religious and spiritual symbolism, from the shape of the doorknockers, to the patterns painted on doors and ornate hand-carved wooden ceilings.

Originally built as royal palaces and private homes for the wealthy elite in Morocco, riads became a popular style of private family home over the centuries, but the cost of maintaining them left many to fall into disrepair in the first half of the 20th century. In recent decades, increasing interest from foreign buyers and tourists has led to the transformation of many historic riads into boutique hotels and guesthouses with private rooms and shared common areas, increasing the demand for historic riads and reinvigorating traditional artisan skills that were slowly dying out.

What are the characteristics of a riad?

How do you restore a riad?

Historic riads from the 17th and 18th century are still available for purchase in Morocco but can be difficult to find. They are made from traditional materials such as mud brick and timber sourced from the Atlas Mountains, which create natural insulation, protecting from the heat in summer and the cold in winter.

These traditional properties require regular maintenance by local master builders, skilled in working with traditional materials. Although labor costs in Morocco are low, restoration can be expensive due to the high cost of traditional materials. Buyers thinking of purchasing a historic property in need of extensive renovation should expect to spend as much on restoration as they do on the original purchase. Many riads have been torn down and rebuilt several times over the centuries and buyers may find that some properties contain a blend of historic and modern elements.

Are there modern riads?

Many buyers prefer to opt for modern riads, which are built using contemporary techniques and materials but echo the form and aesthetics of historic properties, making them less expensive to maintain. Modern riads often incorporate small swimming pools into the courtyard in place of the traditional central fountain. Their construction allows them to avoid some of the pitfalls of historic properties, such as the flooding of the central courtyard in rainy weather, thanks to modern foundations and drainage techniques.